Helmholtz researchers decipher mechanism of new drugs for the treatment of depression, pain or obesity 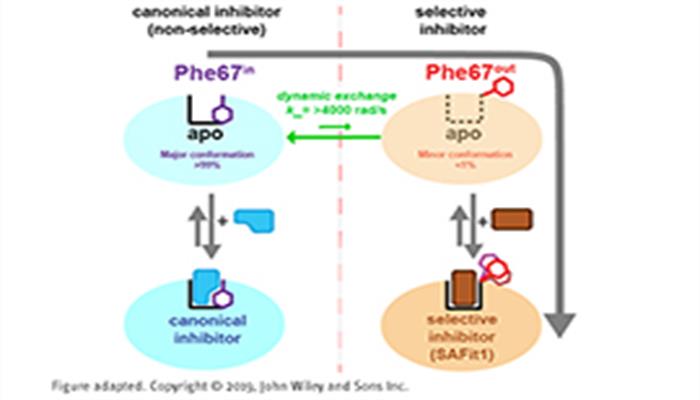 Researchers at the Helmholtz Zentrum München have come one step closer to developing novel, selective drugs for the treatment of psychiatric disorders. They discovered how inhibitors inactivate a special protein that plays a crucial role in various diseases. This mechanism of action can be transferred to other medically relevant proteins, which have so far been difficult to develop specific inhibitors and could therefore contribute to the more efficient development of new drugs.

Depression, chronic pain or being overweight appear at first sight like different illnesses. But a small protein with the abbreviation FKBP51 plays a key role in all three conditions, as several studies prove. Thus, the FKBP51 protein was already known as a target for drug therapies.

The thing has only one catch: FKBP51 can not be inhibited simply by an active ingredient, because the antagonist, the protein FKBP52, structurally too similar. While FKBP52 increases the activity of glucocorticoid receptors **, FKBP51 inhibits them. Glucocorticoid receptors are the "receivers" of stress hormones in the brain. Their activation can lead to long-term psychiatric illnesses. The development of a selective drug that can target between two proteins and inhibit only one of them is therefore essential for the development of an active ingredient without undesirable side effects. The situation can be compared to having to develop a specific key that only fits into the keyhole of FKBP51, but not FKBP52.

As early as 2014, Felix Hausch from the Max Planck Institute of Psychiatry developed the highly specific inhibitor SAFit in order to switch off only the protein FKBP51 and not FKBP52 ***. "The underlying mechanism for this selectivity was unknown," says Prof. Dr. med. Michael Sattler. He is Director of the Institute of Structural Biology at the Helmholtz Zentrum München and the Technical University of Munich.

How do inhibitors work in FKBP51?

To clarify this question, Sattler and colleagues combined different methods. By NMR spectroscopy, the internal motility of the FKBP51 protein was determined to investigate its role for the SAFit drug. Added to this were biophysical measurements of the binding strength and rates of binding, as well as mutation analyzes. If individual bases are exchanged in the associated gene, proteins with altered properties are produced. Thus, it can be seen which amino acids of the protein are required to mediate the binding of an active ingredient.

Sattler speaks of a "crucial step in the development of new drugs" because: "The concept discovered here and our methodology can now be transferred to other proteins where it is difficult to develop selective inhibitors." This opens up new possibilities for many diseases with "unmet medical needs".
The good, the bad and the spliceosome!
As the German Research Center for Health and Environment, Helmholtz Zentrum München pursues the goal of developing personalized medicine for the diagnosis, treatment and prevention of widespread widespread diseases such as diabetes mellitus, allergies and lung diseases. It examines the interaction of genetics, environmental factors and lifestyle. The headquarters of the center is located in Neuherberg in the north of Munich. The Helmholtz Zentrum München employs around 2,500 people and is a member of the Helmholtz Association, which includes 19 scientific-technical and medical-biological research centers with around 37,000 employees.
The Institute of Structural Biology (STB) researches the spatial structure of biological macromolecules, analyzes their structure and dynamics, and develops NMR spectroscopy methods for these investigations. The aim is to elucidate molecular mechanisms of the biological activity of these molecules and their involvement in diseases. The structure data is used as a base