The principal holiday resort of the Mediterranean is the lovely region of Antalya with a majestic coastline of beaches and rocky coves where the towering Toros (Taurus) Mountains provide a magnificent backdrop. Antalya is an attractive city, at an altitude of only about 50 metres, with shady, palm-lined boulevards, a prize-winning marina and a picturesque old quarter called Kaleici which has narrow, winding streets and quaint, old, wooden houses next to the city walls. Since its founding in the 2nd century B.C. by Attalus II, a king of Pergamon who named the city Attaleia after himself, it has had a continuous history. The Romans, Byzantines and Seljuks occupied the city before it came under Ottoman rule. 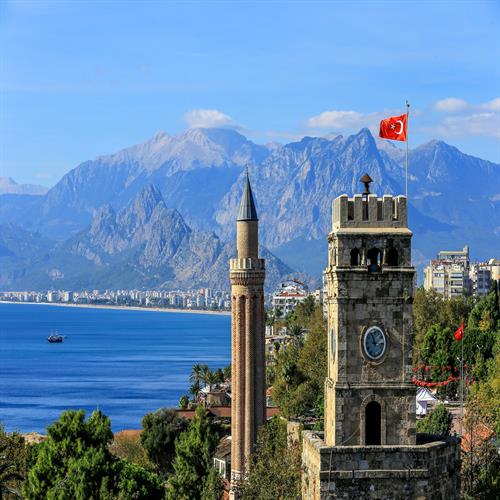 PLACES OF INTEREST IN ANTALYA 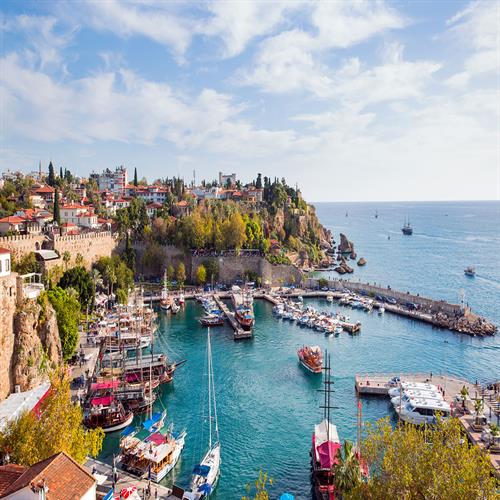 Archaeology Museum: With remains from the Paleolithic Age to Ottoman Times, this is one of the most important museums in the Mediterranean region. (Open daily except Mondays.)
Ataturk Museum: This museum displays objects used by Ataturk, founder of the Turkish Republic. (Open daily except Mondays.)
Suna-Inan Kirac Museum: This museum is connected to the Research Institute for Mediterranean Cultures.

HISTORICAL SITES AND MONUMENTS IN ANTALYA

Ancient City Walls: Since its founding in the 2nd century B.C., Antalya has had a continuous history. The ancient walls flank the city and other sections of the walls are still standing near the marina.
Clock Tower: Situated by the ancient city walls, it was part of the old city fortifications in the Kalekapisi Square.
Hadrian's Gate: The beautifully decorated, three-arched gate was built in honour of Hadrian when he visited the city in 130 A.D.
Hidirlik Tower: This tower was probably first built as a lighthouse in the 2nd century.
Karatay Medrese: This theological school dates from the 13th century and is situated in the Kaleici neighbourhood. The stone carvings on the portal and mihrap (prayer niche) are fine examples of Seljuk art.
Ataturk Monuments: One of the largest and most interesting monuments is located in Cumhuriyet Square within the city centre. The other one is in the center of Vatan Square.
Kaleici Quarter: This quaint area surrounding the Kaleici Marina is full of small hotels, pensions and restaurants as well as restored houses that all help to create the atmosphere for which the city is famous.

Yivli Minareli Complex: It was built by the Seljuk Sultan Alaeddin Keykubat in the 13th century. Its elegant, fluted minaret has become the symbol of the city.
Kesik Minaret Complex: A memorial to the mixed history of Antalya is the Kesik (truncated) Minaret Mosque. Formerly a church, it has seen Roman, Byzantine, Seljuk and Ottoman modifications.
Tekeli Mehmet Fasa Mosque: An important 18th-century Ottoman mosque situated in the Kalekapisi district, inside the city walls.
Murat Pasa Mosque: The unique tile design of this mosque built in the 16th century is of particular interest.
Iskele Mosque: This attractive little mosque built in the 19th century is situated beside the marina. It was constructed of set stone and built on four pillars over a spring.

PARKS AND NATURAL BEAUTY IN ANTALYA 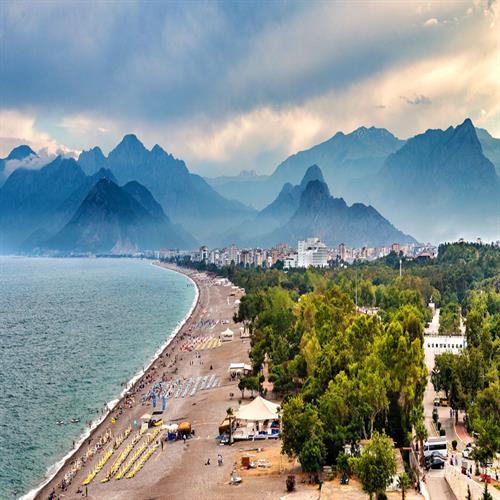 Karaalioglu: A magnificient view of Antalya awaits visitors here with colourful exotic flowers, vivid in the sunlight with the shimmering water of the bay and the mountains in the background.
Mermerli: Situated just above the marina at the southeast comer of the Kaleici district, this park is the best place for relaxation with a wonderful view of the mountains.
Ataturk: This park also has a wonderful view of the city, displaying gorgeous flowers and an incredible scenic view.
Genclik: Situated on a peninsula, en route to Lara Beach you can see Duden Waterfalls from this vantage point, a most breathtaking view of the falls as they cascade into the sea.
Yavuz Ozcan: A peaceful respite within Antalya's city centre. This park is delightful with its pools, miniature waterfalls and beautiful fountains which display colourful lights in the evening. Recep Bilgin: This park, located not far from Yavuz Ozcan Park is situated within the city center and is worth a visit to see its architectural design.
Konyaalti Woods: Situated behind Konyaalti Beach, this park provides a nice, shady, cool place for rest and relaxation outside the city.
The Upper Duden Waterfalls, 14 km to the northeast, are unique because you can walk behind the cascade. On the way to Lara Beach, 10 km to the east, are the Lower Duden Waterfalls that plunge straight into the sea. The nearby rest area offers an excellent view of the falls but the view is most spectacular from the sea. Kursunlu Waterfalls and Nilufer Lake, both 18 km from Antalya, are two more places where nature displays her beauty.

Lara: This sandy beach is about 12 km to the east of Antalya city centre.
Adalar: Situated on the lower side of Karaalioglu Park, there are steps leading down to the beach which consists of little rocky islands. Beach facilities are available.
Mermerli: Situated near the Antalya Marina in the Kaleici district and located adjacent to Mermerli Park.
Konyaalti: This long, pebbled beach lies west of Antalya, where a breathtaking view of the mountains can clearly be seen.
Topcam: This beautiful beach is situated at Olympos National Park, across from Sican Island.

ART, CULTURE AND ENTERTAINMENT IN ANTALYA

Antalya is full of exciting cultural activities and entertainment possibilities. The annual Altin Portakal Film and Art Festival held in the autumn and Antalya's annual jewellery festival are just a few of the many events available. Antalya's Fine Arts Gallery offers performance exhibitions. The Aspendos Open Air Theater is a wonderful place to see international opera, ballet and symphony orchestras. Every year special classical performances are held here as well as performances by the most popular Turkish enter- tainers. For evening entertainment, Antalya's Kaleici Marina and Leisure Centre is the best place in the city with many beautiful restaurants, cafes, bars, parks and discos in this area. Near Setur Marina, dining is available on floating seafood restaurants in an unpretentious and nautical atmosphere. For a pano- ramic view of the area there is a holiday complex and revolving restaurant, 15 km from Antalya, on top of Tunektepe Hill. One can also have a good time at the two water recreation parks Aqualand and Aquapark near the Culture Park.
A Culture, Exhibition and Congress Center was opened in 1996 in the Konyaalti Quarter. The Congress hall itself is in a glass pyramid.

Some of the best shopping may be found in the Kaleici district, near the city walls. Meander down through the side streets in the old quarters where it's possible to find anything your heart desires. Old Turkish kilims, original gold jewellery, leather products, natural cotton clothing, handmade wood items as well as traditional Turkish handicrafts abound here. Ataturk, Cumhuriyet and Isiklar are the three other shopping avenues. Don't miss the colourful open air vegetable and fruit market, the place for food shopping as well as a great place for capturing that perfect picture.