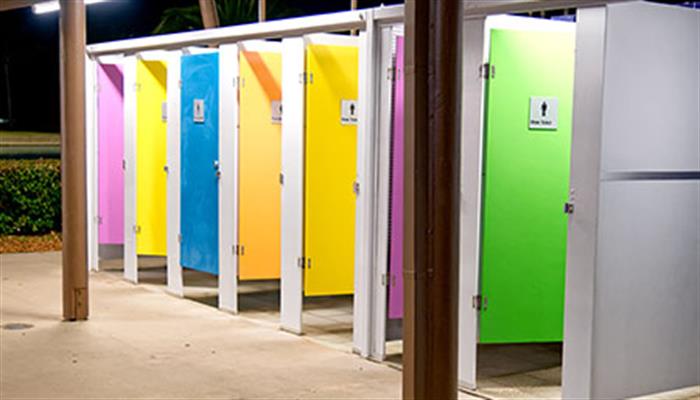 Yangzhou / Seattle - When it comes to high-risk locations for corona infection, public toilets could play a role. This is suggested by at least one study by Chinese scientists, the results of which were published in the journal Physics of Fluids (Physics of Fluids, 2020; DOI: 10.1063 / 5.0013318).

The researchers examined how small suspended particles are distributed in the air when flushing a toilet. It is possible that virus-contaminated aerosol clouds could be inhaled by other people, they conclude. Studies previously had shown that the stool of infected people may contain coronavirus material.

The physicists at the University of Yangzhou used detailed computer models to trace the water and air currents that arise when flushing with different types of toilets. Accordingly, vortices are generated in the toilet, which continue in the form of aerosol clouds above the bowl - to a height of just under a meter, where they can be inhaled or deposited on surfaces.

Aerosols are a mixture of solid or liquid suspended particles in the air. The small micrometer-sized droplets can hover in the air for more than a minute, as the researchers explain. With toilet types with 2 water influences, the aerosols flew up even faster.

"It can be assumed that this speed will be even higher if a toilet is used frequently, for example in a family toilet or a public toilet in a densely populated room," explains co-author Ji-Xiang Wang. The solution, however, is simple: close the toilet lid before flushing. However, many toilets in public spaces, especially in the United States, would not have a lid - a fact that Clemens Wendtner from Munich Clinic Schwabing also points out in an independent comment.

In this context, the infectiologist recalls discussions about the spread of the virus on cruise ships. "I don't think such spreading is out of the question." In addition, there are more and more studies on viral load in the stool of COVID-19 patients.

Wendtner himself, together with the virologist Christian Drosten from the Berlin Charité, published an analysis in the journal Nature, in which the course of the infection of 9 German patients was reconstructed. It was shown that SARS-CoV-2 probably also increased in the gastrointestinal tract. However, no infectious viruses could be documented in the patient's stool.

"However, this is always difficult with stool samples because E. coli bacteria always overgrow everything else," notes Wendtner. "However, we were unable to detect any replication-capable viruses." Nevertheless, it cannot be completely ruled out that fecal excretions also pose a risk of infection going out.

At least that's the warning from researchers at the U.S. Swedish Medical Center, who analyzed 29 studies on gastrointestinal consequences of COVID-19 disease in a meta-analysis involving 4,805 patients.

As they report in the journal JAMA Network Open, diarrhea, nausea or vomiting were symptoms of more than ten percent of all infected, regardless of which the virus was found in the stool in 40 percent of those infected.